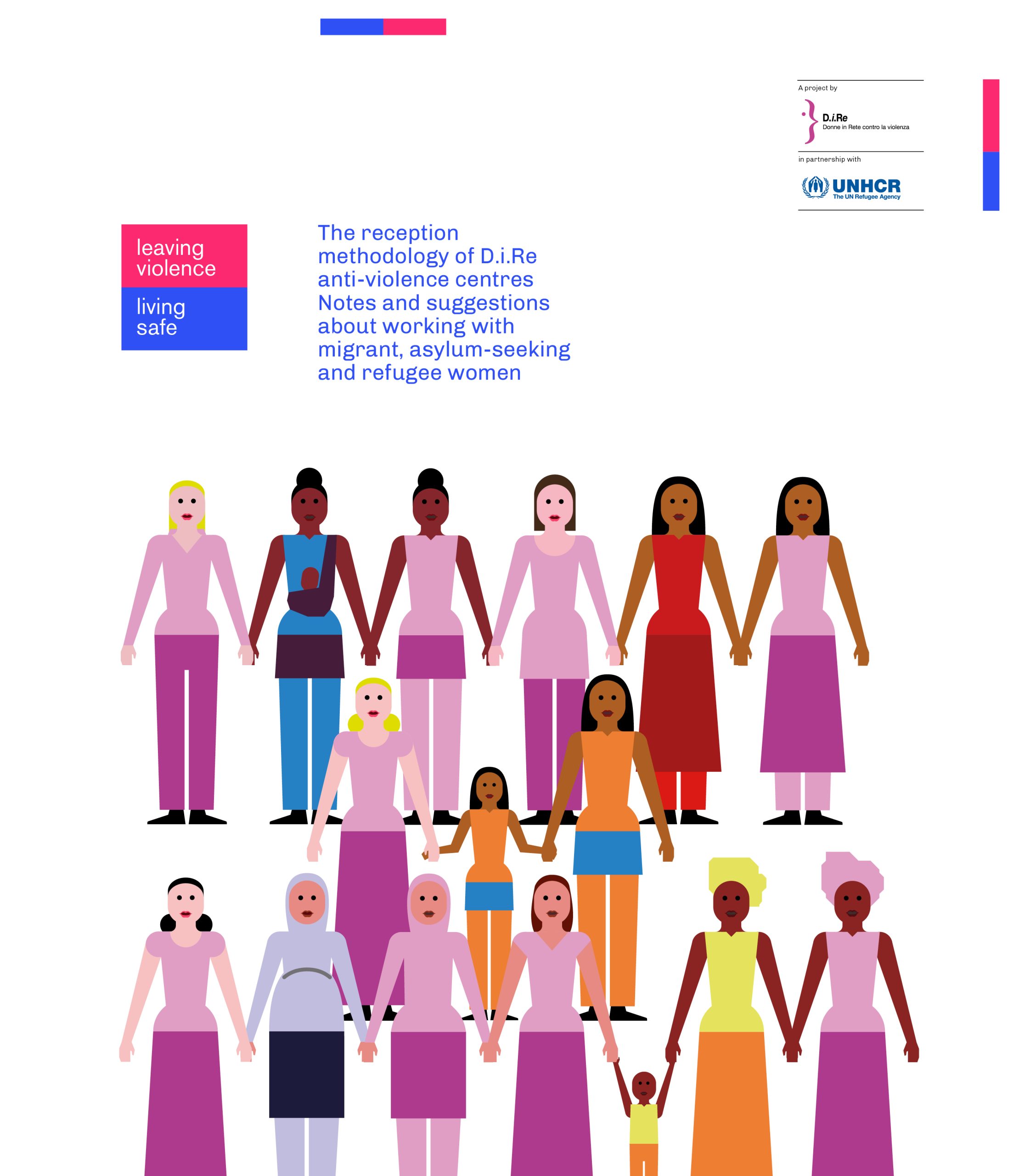 Here you can download  The reception methodology of D.i.Re anti-violence centres. Notes and suggestions about working with migrant, asylum-seeking and refugee women, a textbook produced in the framework of the Living violence. Living safe project to support the work of D.i.Re anti-violence centres as the number of migrant, asylum seeking and refugee women they support grows constantly.

From the very first moment, the Leaving violence. Living safeproject, implemented by D.i.Re – Donne in rete contro la violenza in partnership with UNHCR, the United Nations High Commissioner for Refugees, has looked at the working methodology of anti-violence centres, to understand how it changes in the strive to address the specific needs of migrant, asylum seeking and refugee women and girls who survived sexual and gender based violence.

The inclusion of cultural mediators in the anti-violence centres’ teams has progressively transformed the approach, as the constant knowledge exchange has cast new light on cultural backgrounds of both, the women supported and the women working in the centres.

The content of the manual is rooted in the daily experience of  the numerous case workers and cultural mediators of D.i.Re anti-violence centres that over the last 3 years have participated in various Leaving violence. Living safe project activities, including trainings, workshops and meetings, and have shared their thoughts, observations, discoveries and lessons learned while concretely supporting asylum seeking and refugee women in their path to overcome violence.

The authors of the manual are Iliana Ciulla, active at Le Onde, Palermo, Celina Frondizi, active at Ananke, Pescara, Carmen Klinger, active at Olympia de Gouges, Grosseto, Elisa Serafini and Valentina Torri, active at Pronto Donna, Arezzo. The structure and key contents of the manual were identified during a participatory workshop carried out in 2019 including all cultural mediators and case workers involved in the project. The graphic concept and layout are by Cristina Chiappini.

The first four units – dedicated respectively to Needs, Truth, Fear and Trust – try first to deconstruct these concepts from the point of view of both, the women supported and the operators and cultural mediators of anti-violence centres, and then to provide some practical suggestions for addressing these key elements  of the relationship while building a step by step path to support migrant, asylum seeking and refugee SGBV survivors.

The other four units – Before, The space, The team, After – highlight the key elements of D.i.Re’s support methodology in its adaptation to address the specific needs of migrant asylum seeking and refugee women. D.i.Re’s support methodology, a feminist methodology based on the relationship among women, is in fact transformed with the inclusion of cultural mediators in the operating teams as well as with the outreach to new stakeholders, such as the Territorial Commissions for international protection as well as the various actors in charge of migration policies.

The Additional information at the end of the volume provides a synthetic picture of asylum legislation in Italy; a model registration form to be used in anti-violence centres; a list of the most common stereotypes that often condition, even unwillingly, the communication with migrant asylum seeking and refugee women; and a representation of possible “hidden thoughts” that “flow” behind the words exchanged between case workers and the women supported, in particular during their first encounter.

A few pages for annotations close the volume. This is in fact a first attempt to capture the adaptation of D.i.Re’s support methodology, and each operator or case worker that will use the manual might want to annotate their observations, critiques and suggestions to make it a constant work in progress

Download “The reception methodology of D.i.Re anti-violence centres. Notes and suggestions about working with migrant, asylum-seeking and refugee women”